Live the Chai Life with Jewish Voice for Peace‏

I'm writing to you today for one important reason: Chai. In particular, Jewish Voice for Peace's Chai Society for people like you who believe deeply in the work of this organization - who believe in the life it has breathed into the movement for peace, and who are willing to be part of the life force that sustains us through good times and bad.
It's pretty simple - $18 per month. That's it. That's all it takes to allow us to count on a stable budget every month to run the campaigns that are making headlines and changing the world.
Are you in?

I'm new here - well, new to the staff at least. I was a supporter long before I joined the staff as their first ever development director. My job is to raise the money so that our campaign staff can focus on campaigns.

Back when I was a college student, even before I spent my junior year abroad in Jerusalem, I was struggling with so many things about my Jewish identity, community, and justice politics. There were ways I felt I fit in, and other ways I struggled with the Jewish institutions. And when I went to Jerusalem, and experienced for the first time in my life the painful truths about Israel and Palestine, that feeling of tension just grew.

Shortly after, like many Jews who reject the notion that marking our bodies is forbidden by Jewish law, I got my first tattoo. It was a "chai" on my arm.
"Chai" literally translates to mean "living" but is a symbol that signifies Judaism's focus on the importance of life.  I got it to remind me to be present to all that life has to offer, to serve as a Jewish good luck charm that I could carry with me always, and as part of showing the world that my Jewish identity is one that both deeply respects tradition, and honors and embraces change making, evolution, risk taking, justice, and difference.
Chai, it means living.

I can't imagine a better name for the group who sustains us and our daily work for life for all people. Your $18 (or more) a month will provide the backbone for Jewish Voice for Peace. Your regular gift helps us plan and budget. It literally gives us confidence and strength to do the work we do for a better future for all people in Israel and Palestine.

I hope you'll join. And, no matter what, thank you for all you've already done and will do. It means more to us than perhaps you know.
L'chaim,

Dana J. Schneider
Development Director
P.S. I look forward to getting to know many JVP'ers around the country as I settle into my position.  To this end, please don't hesitate to call or email me with questions or just to chat. I am reachable at dana@jvp.org, or in our New York office at 718.514.2071. 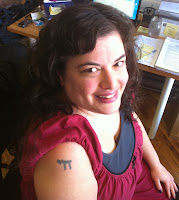 Dana.
You have been in occupied Palestine the land of which was stolen with all what is on and under it by Zionists who has no relation with this land, and even its name was forged to be called by the occupiers “Israel”, which is a sort of piracy like everything Zionists do, do you realize that. And still Zionist are trying to steal more Arab land by, as is always the case, the force of arms and terror helped by colonialst powers lead by the United states after they took over from the colonialist British, who not only finance Zionists, but Americans were the only permanent UN SC who vetoed the Arab draft resolution to condemn Zionist colonies built not only on Palestinian land occupied in 1948, but these occupied in 1967.

Do you think that my own land and home and other property could be liberated with what you call peace, what peace is that Zionists understand. My dear what was stolen by force cannot be liberated except by the way it was stolen,force.

I was uprooted from my home and land by Zionist terror, still I cannot even visit my home where I was and my father and mother and the parents and great grandparents for a thousand generations were born in this land whose name was forged to become “Israel”!!!!,

If you want money for your peaceful project my and all uprooted Palestinian brothers and sisters fortunes are still in occupied Palestine, which Zionists use to import more Zionist colonizers to replace my people; so you can finance your project from it.

What you should do my dear Dana, is to convince more Jews like you who went to occupied Palestine is to leave it for its rightful owners, It doesn’t belong to them. If they remain in it, it means they are participating in a war crime and a crime against humanity.

I hope you understand my logic, we have no hate for Jews unless they keeps away from our occupied land.
We appreciate your feeling in declaring: “I went to Jerusalem, and experienced for the first time in my life the painful truths about Israel and Palestine, that feeling of tension just grew.” You are a woman conscience; so work for the Palestinian Arab cause.
Have a good life back home in Brooklyn.