At the time when all the Arab nation is revolting against its rulers who are conspiring with Zionist and pro Zionist imperialist powers we see the successive American administrations abide by Zionist/American and Zionist/”Israeli” lobby’s orders, namely justifying the colonization of what remained up to date of Palestine still not yet stolen by Zionist colonizers!!!

1.
Up to a certain extent we don’t blame the Zionist entity’s  Deputy PM, /FM Avigador Lieberman who was born on June 5, 1958 in Kishinev, Soviet Union (now Moldova). and came from his homeland to steal mine, Palestine, to declare: “Anti-settlement vote proves UN is a 'rubber stamp' for Arab nations!!! for after all he is a very well known ultra racist Zionist who is insisting on colonizing every single inch of what remained un-stolen of Palestine, but we blame the US President Barak Obama who claims that the United states and of course him are honest peace Brokers. On Sunday, January 27, 2008 I wrote him an Open Letter from which I quote the following paragraph just to remind him of what we tried to tell him about the Palestinian tragedy, and that was long before he ordered his chief representative in the Security Council, Susan Rice, to veto UNSC draft resolution on settlements in the West Bank  and East Jerusalem submitted by Arab states. Our open letter said:

Mr. Senator Obama, how is it possible that a personality of your status, caliber and intelligence has missed to read, see and hear the news of how Palestine was occupied and Palestinians are treated like slaves if not animals, which is by far worse than the way enslaved Africans were treated for centuries by American colonizers? Did you read, hear or see how those Palestinians are tortured and dehumanized on the over 750 checkpoints and crossings all over the occupied West Bank of Palestine? Did you hear, read or see how barbaric Zionist colonizers are still stealing more and more Palestinian land to build more Zionist colonies over what remained unoccupied and un-stolen of Palestinian Arab land, and how these wild racist colonialists are uprooting tens of thousands of centuries’ old olive trees, razing thousands of acres of farmland, demolishing thousands of residential, office and industrial buildings and leaving thousands of people living in the open air or tents in the heat of the summer or the freezing cold of the winter? We doubt that you don't have the courage to admit that you have heard, seen or read about the apartheid wall that Zionists unashamedly call "security wall" while the main reason is to steal more land that is left of the 22% that was left of Palestine unoccupied in 1948, and let's not forget the stealing of fresh water resources to be used by Zionist colonialists to be pumped back out of their sewage system as filth and flooded back over the fields of the poor occupied Palestinians?! And you turned your face away pretending not to have seen, heard or read about all that and many  many other war crimes the Zionist state of Israel committed,  which had been denying Palestinian Arabs to exercise their inalienable Right of Return to their stolen homes and land!!!! 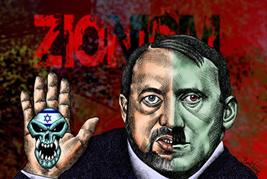 1.    Unfortunately Your  US Ambassador to the United Nations, Susan Rice, was the only one representative of the five UNSC permanent members to raise her hand and say VETO.
Mr. President Barak Obama, even an old colonialist power such as the United Kingdom, which hadn’t yet in 1917 occupied Palestine, and still announced the Balfour Declaration to the Zionist movement, promising the international Zionist movement a national home for Jews in Arab Palestine, which stated: “His Majesty's government view with favour the establishment in Palestine of a national home for the Jewish people, and will use their best endeavours to facilitate the achievement of this object, it being clearly understood that nothing shall be done which may prejudice the civil and religious rights of existing non-Jewish communities in Palestine, or the rights and political status enjoyed by Jews in any other country."[1] Noting that it is meant with the non-Jewish communities in Palestine, Palestinian Arabs who used to form before the beginning of the Zionist invasion of Palestine in the late 19th century almost 100% of the total Palestinian population, as even Palestinian Arab Jews considered themselves as part of the Arab population of the land. They were Arabs of the Jewish faith, Even the United Kingdom itself didn’t like its big ally, the United States that reluctantly stood its ground on behalf of "Israel”  and on February 18, 2011 vetoed a resolution on the Israeli settlements  in the West Bank and East Jerusalem that was supported by all 14 other members of the UN Security Council.
The United states, which invaded the sovereign Arab state of Iraq, claiming that it wants to liberate and democratize it, is even contrary to the Balfour Declaration, which by all means is contrary to democracy and the right of self determination, which it hails and claims to promote is by allowing the Zionist entity to steal all the land of Palestine and ethnic cleanse its indigenous Arab population, thus is supporting colonialists to deny Palestinian Arabs to defend themselves and struggle to protect their human rights especially their democratic rights of defending their land against racist occupiers.

The United States, which claims to be an honest peace broker tried to exert pressure on the weak Palestinian authority to give up the national rights of Palestinian Arabs in their land to the interest of the racist Zionist entity. “On Thursday March 3rd, President Barack Obama telephoned Mahmoud Abbass, the Palestinian president, to urge him to block a UN Security Council resolution condemning settlements. Obama pressed very hard during the 50 minute call, so hard that Abbass felt constrained to agree to take Obama’s request to the PLO executive committee (which, which without surprize, agreed that Abbass should not accede to Obama’s request).  http://english.aljazeera.net/indepth/opinion/2011/02/201121815137386765.html