Zionism, liberalism and Democracy
By: Adib S. Kawar
With reference to Alvin Alexsi Currier comments on Roger Cohens we appreciate him saying saying: “First of all, Israel does not have a “right” to exist as an exclusively Jewish State, any more then our German Reich had a “right” to exist for Aryans only.” Though Aryans in Germany are unlike Zionists in Palestine are not intruders they are in their own homeland, and had not they were racist against Western Ashkenazim Jews and invaded other sovereign European states, excluding non European countries in the “third world”, which were colonized by Western colonialist states, enemies of Nazi Germany would never have declared war against it.

There are too many points in this  article The Swastika and the Star of David that should be commented on, but I shall handle only few of them:
:
1- “Liberal Zionism” Liberal and Zionism are two contradicting terms, as Zionism’s aim is to steal somebody else’s land and ethnic cleanse it from its indigenous inhabitants and lawful owners by means of terror and force of arms. For over a century and quarter Palestinian Arabs had been massacred and tortured by the force of arms with the help of western colonialism; so among those Zionists where you can find people who are actually liberals, namely how many non fascists among those who proudly call themselves liberals?!
2- Saying: “Israel is not a democracy outside the 1967 borders.” is false. The Zionist state of “Israel” is neither a democracy within what it call its 1967 nor within its 1948 border, because even within its 1948 border that exceeded the illegal partition plan, which was imposed by forgery on UN member states and without the consent of the land of Palestine owners, Palestinian Arabs, nor they were consulted regarding the partition of their own land, by granting 55% of its area to intruders and invaders who has no relation with this land historically or legally both in relation to the myth of the promised land, as even if such a promise is given, which is a false promise, doesn’t apply on the majority of those who call themselves Jews were promised the land of Arab Palestine, nor to the over 90% of today’s Jews, the Ashkenazi Jews who are not semitic, which is non and anti democratic. Zionist invaders exceeded the illegally 55% of Arab Palestine given to them by American and Zionist pressure and bribery on small UN member states to achieve two thirds of the UN member states, they with the help of British colonialism (The so called mandate) were able to occupy 78% of the land in 1948, noting that the illegal Zionist immigrants counted only one third of the population of Palestine in 1947 (two thirds of who were smuggled into Palestine and didn’t even have Palestinian identity papers).!!!
3- “Israel has no military presence in Gaza, and its military presence in the West Bank is necessary for the protection of Jews living in it.” Saying Israel has no military presence in Gaza is completely false. as it keeps it under siege and is being invaded and bombarded at least every other day. The Gaza people are not free in their own land. they can’t freely enter or leave it; so would any sensible person claim that it is not occupied?! As for military presence in the West Bank is necessary for the protection of Jews living in it. What right do Jewish Zionist occupiers have to be in the West Bank, not to say in any part of occupied historical Palestine; so as to have military presence to protect them. Palestinian Arabs have the full right to resist Zionist occupation against Zionist state terrorism.
4- The author added: “The Palestinian Authority has jurisdiction over most of the West Bank. Remember, in 1948, the Arabs' response to being offered the West Bank as part of a future Arab State was to declare war immediately after Israel declared its independence.” The joke of “The Palestinian Authority has jurisdiction over most of the West Bank…”
Have a look at any map of Zionist colonies in the West Bank and then decide for yourself what sort of jurisdiction does the so-called P.A.  has on most of the West Bank… actually non. Palestinian Arabs cannot move an inch in the West Bank without having a permit from the Zionist occupation forces… Jurisdiction!!!!
Saying: “offered the West Bank as part of a future Arab State” Palestinian Arabs are the owners of their land; so no body has the right to offer them or deny them the authority of their land, not to say intruder colonialist occupiers. 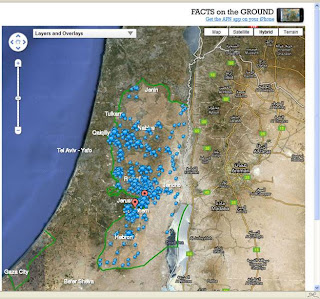 Where about can you build a Palestinian state in the West Bank?
noting that where the density of Zionist colonies
in the Jordan valley is low, entry is prohibited to Palestinian Arabs
5- “1irst of all, Israel does not have a “right” to exist as an exclusively Jewish State, any more than our German Reich had a “right” to exist for Aryans only.”  Yes of course “Israel” doesn’t have a right to exist under any circumstances as a full Jewish State, or even as a state for all of its citizens. because it exists on an occupied and ethnically cleansed land by the force of Arms…. on the land of Arab Palestine. If Palestinian Arabs accept imported Jews to remain in Palestine, it would be out of generosity and nothing else, if they are there it is not a right at all.
Zionist invaded Palestine with the help of Western colonialism especially the British, who with their American allies declared a war on Iraq, because Iraqi troops occupied a state, Kuwait, a land sliced out of Iraq to create the State of Kuwait, on the basis of sivide and rule.

6- “Secondly, the dilemma Beinart constructs between supporting Israel and being committed to democracy is false. Israel is not a perfect democracy, but it is far better than any other country in the region.” We the Arab people are against Arab regimes and their rulers. Democracy is indivisible. Democracy is either complete or it doesn’t exist at all; so you don’t compare yourself with regimes that only exist under the protection of colonialist powers, including the Zionist entity, to protect their existence and interests in the Arab homeland. It is important to mention that Western colonialist powers ally themselves with authoritarian dictatorial Arab regimes to keep their control over these lands and people.
*
The Swastika and the Star of David
akenkreuz and Davidstern
The Swastika and the Star of David
A public response to New York Times columnist Roger Cohen
By Alvin Alexsi Currier
On June tenth, 2010, New York Times columnist Roger Cohen posted a poignant meditation, weaving his personal joy in the ancient melodies of Judaic tradition, occasioned by the Bat Mitzvah of his daughter, with his personal pain over the staccato rhythms of international news and reaction occasioned by the Israeli interception of the Freedom Flotilla off Gaza.
It as a beautifully written piece. I felt for him.
Suddenly in this sorrowful contrapuntal flow, a cacophony exploded. The cause of this drum roll of rage was a comment by the Turkish Prime Minister who said that now the world perceived the Swastika and the Star of David together.
Ach, ja, I thought in German; Hakenkreuz und Davidstern.
Instantly I knew his rage. I felt his pain.
You see, I was a Pastor in the German Church. I know the pain of seeing the Fatherland I loved go feral. I may have been young and distant when it all started but I have tasted the rage of watching the Swastika gather to itself all things German and then carry them to ignominy in Auschwitz.
Dear Roger, if I have to contradict you, please try to understand that I do not write because I hate Jews. I write because I am an old man who has seen much and wants to save others from the bloodshed I have tasted. Today you rage against what others see. Rage blinds. One cannot reason with it, but one day the warmth of common humanity will evaporate it and you will see four things that are now so clear to so many others.
First of all, Israel does not have a “right” to exist as an exclusively Jewish State, any more then our German Reich had a “right” to exist for Aryans only.
Secondly, Israel is not a democratic country. A democracy does not have two classes of citizens with two sets of laws. An apartheid state does.
Thirdly and most tragically, fed by fear, Israel has conjured up a military might and mentality that like the Golem of mediaeval Prague, has now taken on a life of its own, wildly smashing, trashing, and sowing destruction, in the name of defense and security. I have seen it before. I’m sorry.
Finally, Israel as an exclusive theocracy will crumble. The Palestinians will return. Liberty and justice will be established for all. Jews and Arabs will again live together in peace.
Yet even while watching with horror these last days of Zionism, I have a certain peace because I know that this hell is the beginning of the end. The era of arguing Hakenkreuz or Davidstern is over. The issue of my Holocaust verses your Nakba is passé. The Stars and Stripes, the Hammer and Sickle, the Swastika and even the Star of David no longer flies crisp in winds of zeal and allegiance. Again something beyond banners, nations, courts or creeds has been awakened. The human heart is on the move. As the blood of Jewish freedom riders marked the beginning of the end of the siege of segregation in the Southern United States, so the blood of Turkish martyrs marks the beginning of the end of the siege of Gaza, the occupation of the West Bank, and the apartheid state of Israel. See how the ranks are swelling from every people, nation, color and creed. See the flotillas forming in wave after wave. Hear the strains of “We shall overcome” in the air.

Dear Roger, don’t be afraid. After the end, hand in hand, we shall go together up to Jerusalem, not singing the Hatikva, but hymning the common prayer that: “every man ‘neath his vine and fig tree, shall live in peace and unafraid”.
مرسلة بواسطة Adib S. Kawarأديب قعوار في 10:03 م