Wealth of the Mubarak Dynasty

Wealth of the Mubarak Dynasty

The Algerian daily “Al-Khabar” published a documented report
supported with figures about Mubarak’s family wealth given
by well informed sources, and said that the family of
Muhammad Hosni Mubarak, the Egyptian president,
including his wife, Suzan Mubarak, and his two sons, Jamal and Allaa
own more than US$ 40 billion in real estate and cash in banks,
American financial establishments and Swiss and British banks.

The paper’s sources points out that Jamal Mubarak, assistant secretary general
of the ruling party, The National Democratic Party, owns alone
a wealth estimated at US$ 17 billion invested in secret accounts
spread in several financial establishments in Switzerland,
Germany, the United Stated and the United Kingdom,
where he owns a secret current account in the Swiss Bank U.B.S.
another in I. C.M…His wealth is spread through several funds
in the United States and the United Kingdom, among which are
are the British real estate “Bristol and West” establishment
and “Financial Data Service”. which runs mutual financial
investment funds.

As for Mrs. Suzan Mubarak she owns as per a secret report
by high foreign sources, she entered the billionaires club since
the year 2000, when her personal fortune exceeded one
billion dollars, deposited mostly in American banks, she also
owns real estate in several European cities such as London, Frankfort,
Madrid and Paris and in Dubai. Egypt’s “first lady” owns today between
three and five billion Dollars, most of which she got through
personal interferences in the interest of businessmen.

As for Allaa, his personal fortune that includes real estate and cash
is worth US $ 8 billion. His real estate belongings are spared around
in Los Angeles, Washington and Rodeo Drive Manhattan,
New York, one of the most prestigious streets in
the world, worth more than two billion Dollars
in addition two private aero planes and a royal yacht worth
about sixty million US Dollars

“Al-Khabar” said in its report, as for the son of the
Egyptian peasant. President Hosni Mubarak’s fortune is worth
more than US$ 15 Billion, which he earned from commissions
on real estate, arms transactions, suspicious real estate transactions
and touristic sites such as Al-Ghardakah and Sharm Al-Sheikh.
It is not strange that the Mubarak Dynasty’s fortune is estimated
at about US$ 40 bollion. The source of income is from 50% commissions on
net profits imposed in the interest of one of the members of the Mubarak clan
on most big companies of cigarettes such as Marlboro, Hermes and
MacDonald’s (Mansour), Skoda (Shafik Jaber), Al-Izz Iron (Ahmad Izz)
Dream Land (Ahmad Bahjat), which is a company that owns
TV stations that daily attack Algeria. ART (Saleh Kamel), First
(Kamel Al-Khawli), Moven Peak  (Hussein Salem), The Tijari
(Al-Malwani), Vodafone (Nseir) previously before imposing the
same percentage on the British company that own Vodafone Egypt,
Cyrenaica (Abu Al-Ainan), Nassajoun (Weavers) (Khamis)
Hyundai (Gouyour), Minable (Sawiros), Al-Ahram for Drinks
(Al-Rayan), City Stars (Al-Sharbatly and Al-Shakishi),
Amercana (Al-Khurafi and Al-Alfi), Schuler (Mansour Amer)
and many others of big companies. 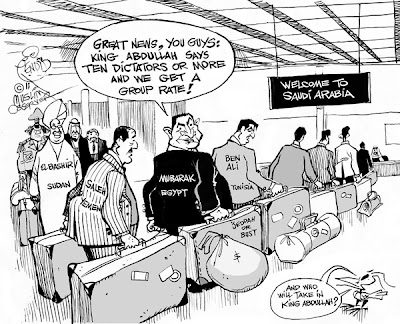