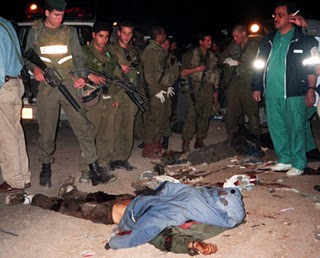 Our address is: In Gaza, Khan Younis – Al-Khalil (1)
In Al-Quds, in the Ghour (2) – in the sad home
My friend: my tears and yours are twins
Crying? The first tear is crying
the eyes it wounds - it blasts them
Two sides are burning in the center
And the other tear
Separation…
Sorrows they awaken - separate us
Two tears are shed
Why is it O you time of subduing
Without security you accept that we live
our dreams…
a long routed life divides us
and babies' food it plunders from us and the place
and in the slave market we live
as with strife we live
on roads, our days aged
in fields,
by silence’s dust they are watched
feeling lost
black are our dreams
as the bereaved dress - dusted is the veil
and the same are our young ones
In my homeland and in the “shatat” (3)
***
A life’s time is your curse
Dawn’s light was an ousted thing throwing me
Sad between tigers' mouths
In my way things were jostling
and in my head
And in pain they were revolting
And time was informing me that the cursed incident
to us is approaching
Bullets shall pierce our sides tomorrow
the sun is setting from afar
agony shall in my head roam
devastation in my opinion is the cursed street
The damned killer in gaiety is carousing
Death’s shadow I saw wallowing in the lane
Disparity - all the people
with bullets are targeted
Sorrow told me
Fear in the world - the bitterness
of separation it carries
your stubborn temple I noticed
looming as mirage among temples
our steps slacken
in you I sunk my pains
A step I heard killing the faraway silence
of my fear I shouted
and of my pains
imprisoned we shall be anew!!!!
How many a prisoner in spite of prison
became like a stubborn mountain
I live in a homeland that
Loves flowers and poems
the warbling unique tone
the judgment of fate I accepted
To patronize you one day I accepted
In security
And in your heart I felt
Traces of ignominy
So I opened a healed wound
Two tears fell
To the ill-omened street I returned
To beg the coward
Asking him – around him I picked
blood I feared to let
Two tears ran
From my pains I cried
And from my sorrow
and I admonished the place
***
For peace I searched
For security
The place revolted
The place revolted with pain
And in sorrow and it said:
Who told you that the deserted street
security gives you???!
The deserted street
Like sorrow it is
Like a beast
Malice, lowliness, contempt
The deserted street
is a massacre and a battle
people die in it
whenever ill fate played
stumps hate are disarrayed
among its masses
confused sight disdains it
its ideas are imbecilic
they stumble whenever they are on a road
Goodness disdains them
O you the annoyance of time
To search in the earth’s filthy we came to search
For work to ease our hunger
But victims of time we became
Remains in the place we became
For a shield we ask people
For eyes we ask tears
To dampen our sorrows
O you the annoyance of time
The world's tale we became
The known street
A massacre, the boy shouts
The rubble what shall we do with it??
Would hate sink in our brain’s folds
Our dreams in peace are deeds
We watered them, they grew among us
In the ill-fated street is our blood
Flowing in glory near us
Don’t shed tears O our eyes
Still searching I am for the people’s remains
Our young ones shall grow among us
And see peace’s birds
Near us from pain they sing
don’t despair you our souls
No, no, don’t despair
Even if the whole world rises against us
The baby shall live with this rubble
The baby shall remove the traces of wreckage
No, no it shall not be bought and sold
in the world’s slave market
(1) Al-Khalil - Hebron
(2) the Ghour - The Jordan river lowland
(3) Shatat – The Palestinian diaspora
Nuha Zurub Kawar, was born in Nazareth, Palestine, her father, Munib Amin Zurub, was of Lebanese origin, he completed his secondary school in Sahyoun school in Jerusalem, and higher education in the American University of Beirut, which was called at the time "The Syrian Protestant College".
Her mother is Izat Salim Kawar, a Palestinian from Nazareth, who is the granddaughter of Tannous Kawar, (The great grandfather of Adib Kawar) the founder and first president of the municipality of Nazareth.
Nuha is the wife of Bahjat Iskandar Kawar, who is a graduate of Haifa University, where he specialized in the Arabic language, and they have four children, Sahar, Dr. Iskandar, Marwah and Sany who are all university graduates.

She wrote for several newspapers, magazines and broadcasting stations early in her life under the name of “The daughter of Nazareth”. She gave many lectures in the country and abroad. She worked for many international voluntary organizations. Her name was registered in the international record, and “The American Organization for Biographies” from which she got a certificate of “Outstanding International Leaders”, she also got in 2002 from International Biographical Center" the certificate of “The Golden Record for Achievements", as well as a certificate of esteem from Cambridge University, and a certificate of excellence from the minister of Sciences, culture and sports. Dutch Television shot a film about her life and achievements. She also participated in a documentary film that was shown in the local museum and around the world.

She wrote many poems in Hebrew, and many of her poems were translated into English.
Composer Ishaq Abu Al-Izz composed the music for some of her poems which were sang on the largest theaters of the country.

Works of the writer:
·         “Hitaf Al-Kubria” “Cheers of Pride” a poetry collection
·         “Wahj Al-Yara3” “The Glow of the Pen” a poetry collection
·         “Shajarat Al-Majd” “The Tree of Glory”: a poetic play
·         “Al-Shari3 Al-Ghadib” “The Angry Street” A book for children
·         “Tarikh Annasirah” “History of Nazareth”, which is one of the most important books that was published about this period as critics wrote, which is an encyclopedia that talks about the history that little was written about, it also talks about the occupation of the city of Nazareth and its sufferings during the occupation and the dark periods and ages that it passed through.

She also wrote many books for children, poems, memories about the war on Iraq, and a ribbon of memories and the tales of the Sibat (A sibat is an arched alley, one of he most famous sibats in Nazareth is the Kawar family sibat) all these are ready for publication.
مرسلة بواسطة Adib S. Kawarأديب قعوار في 6:06 ص