Back to Opinions Page

Through out the history of the Arab Zionism struggle, it was proved that the Zionist movement was and is still adamant to uproot every Palestinian and some other Arabs and replace them with Zionist colonizers in their homes and land. This is the ultimate Zionist goal.

The moment the Zionist entity occupied in 1967 the mere 22%, which was left of Palestine (The West Bank and the Gaza Strip) after the so-called war of independence of 1948, it started colonizing the left over of Palestine. We all know that non-violent resistance started only during the what is known as the first INTIFADAH, while armed resistance, which some people call violent resistance (Zionists and Americans and some others call it terrorism) and we are sure that Dr. Hannan Ashrawi, who calls for non-violent resistance, is fortunate enough to be still living even in occupied Palestine; so we don't have to teach the teacher of what is going on there.

The Apartheid wall, which is called by the Zionist entity leaders, the separation wall, is only temporary in the sense that those Palestinians who are not yet in the diaspora will be walled in ghettos to make life impossible for them to finally decide to quit their land and homes, or what Zionists call "voluntary transfer". Then and only then the apartheid wall will be dismantled. If we want to give up Palestine on a gold platter to Zionist occupation, those Arabs who are still in Palestine should be ordered to "behave well", and be satisfied with resisting Zionist occupation with their greatest and most sophisticated weapon proposed by pacifists, stone throwing, then they will be thrown out of their homes again sooner then expected!!!  Yitzhak Rabin, who was assassinated by Zionist extremists, even though he ordered his soldiers to break the limbs of teen age stone throwers, if they escape being killed by fire arms, just because those extremists thought he was willing to compromise with Arabs and let some of them stay in their homes.

In 1982 the Zionist entity occupied about half of Lebanon, massacring in the process more that twenty thousand Lebanese, Palestinians and Syrians, and committed the Sabra and Shatila massacre plus others, but when few of their soldiers and officers were hunted by the Lebanese resistance fire, they went around in the streets of Beirut with their loud speakers  pleading to the resistance not to target Zionist occupation men, promising to withdraw from Beirut within two days, which they did.

Twenty two years later the Zionist occupation army was forced by the relentless Lebanese resistance to withdraw from South Lebanon, or what they called "The Security Belt". For sure the occupation army with its puppet "South Lebanon Army" was at least one hundred times stronger in numbers and armament than the Lebanese resistance, but they had to evacuate without use of negotiations with their tails between the hind legs, why? Because they could not bear with the casualties they suffered. The Zionist occupation forces withdrew without notifying their SLA collaborators whom they left behind to face their fate.

During WWII the French resistance, which was equally weaker in armament, like the Lebanese resistance, inflicted heavy losses on the notorious German Nazi occupation army with it French collaborators, and its assistance was of great value for the allied forces that liberated France and then the rest of Europe.

The Vietnamese and Algerian resistance, the first was able to defeat the French occupation army, and later the mightiest army in the history of the world, the American army, which had to withdraw after very heavy casualties (also not as a result of negotiations!!!). As for Algerian resistance, which even though lost about a million martyrs, but due to inflicting heavy losses on the strong French army and the equally brutal settlers (colonialist) like Zionist colonialists, the Algerians were able to liberate what French colonialists considered as an integral part of Main land France.

Again the American coalition armies in Iraq were not received with rice and flowers, which they expected the Iraqis would shower them with, instead they were showered with all sort of armament, although not as sophisticated as what the occupiers possess. The occupation army had already declared the "liberation" of Falloujah and other Iraqi cities several times, but what!... The Americans invaded Iraq claiming that they came to liberate it but what... At what price is this liberation costing both the occupier and the occupied... up till now more than a hundred thousand Iraqi martyrs fell in about a year and a half after the invasion, this in addition to the casualties they left behind after their 1991 invasion, and the hundreds of thousands of deformed newly born babies as the result of the uranium depleted ammunitions the Americans bombarded the Iraqis with, plus the half million indirect infant casualties due to malnutrition, which was a result of economic sanctions imposed on Iraq. Iraqi armed resistance against the mightiest army in the world is paying off, and Americans are already biting their nails.

Just for a reminder, Zionist leaders are not trying to hide their role in driving the United States of America to invade Iraq, because they thought it was the biggest threat to their security. Then what type of resistance Iraqis should face the occupation armies with, civil resistance or armed resistance? If they chose the second alternative they will be permanently occupied by "their liberators"!!!

Lets return to Palestine, and the Gaza strip, and remember what Sharon said about the Zionist colonies he planted in it, which he considered to be as dear to him as Tel Aviv itself, Sharon who drove his colonizers to build colonies on every hill, this same Sharon is withdrawing, under the threat of the Palestinian armed resistance, of course not willingly, from the Gaza Strip unilaterally. Of course he intends to make of this withdrawal a smoke screen to get almost full hold of the West Bank, but with armed resistance it will finally be liberated, and his strongest and mightiest army in the region and one of the few strongest armies in the world, shall also withdraw.

Unless the ZioAmerican plan to control all the Arab land from the gulf to the ocean is met with armed resistance than we are finished once and for ever.

Some Palestinians want to apply Gandhi's non-violent resistance, but I believe that they are trying to fool themselves, if they pretend not to see the difference between Palestinians facing Zionist occupation and aggression and its type of colonialism, and the British colonialist rule of India. The British occupation army counted about 70,000 men, and their armament compared to the Israeli Occupation Army is too primitive. India's population at the time was 300,000,000 people, while at the moment there are in Palestine more Zionists than Palestinian Arabs both living in an area of about 27,000 sq. kms, compared with the vast area of the Indian subcontinent. But the most important difference is that the British type of colonialism, which was the traditional type of exploiting the land and its cheep labor, while Zionist colonialism is the type that aims at, as we mentioned above, uprooting every Palestinian from his land, and replace him with a Zionist colonizers: so the only way to stay in our land is to: 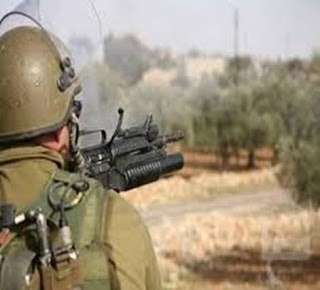